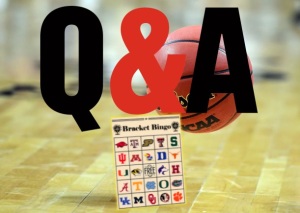 The 2020-21 NCAA Men’s Basketball Season is underway. Check out this Q&A to learn more about our game and how Bracket Bingo developed.

A: Bracket Bingo is the innovative work of two brothers. Growing up, we were always engaged in sports at some level. If we weren’t in the back alley shooting hoops then you could probably find us at the local park doing something active (baseball, football, soccer, golf, biking). Cheering on and supporting the local (MN) sport teams was also a staple of our youth. One of our early memories was going to a Twins game with our late father at “the Old Met” or Metropolitan Stadium (now the site of the Mall of America). Another lasting memory would be attending Game 7 of the 1987 World Series and the hysteria that ensued after the final out was made. Since then our interest in the sporting world has waxed and waned throughout the years but college basketball, and specifically the NCAA Tournament in March, has always been front and center. Whether rooting for a blue blood or pulling for the underdog, each game is unique and creates its own storyline. Like many, filling out a bracket was a yearly ritual. And then one day a thought crossed our minds and the early idea of Bracket Bingo came to form.

Q: What is Bracket Bingo?

A: Bracket Bingo is a game that combines the old with the new, the simple with the strategic, the mundane with madness. Players try to pick the correct teams for each round of March Madness and place them on the playing card according to that round. Each team can only be played once. Simply put, Bracket Bingo includes aspects of the Bracket Challenge but with an old school twist (Bingo).

Q: Why did you start Bracket Bingo?

A: Most gaming platforms are player specific or game specific. We wanted to create a game that did not rely on a specific player performance or a specific point-spread. Our main sports interest is college basketball so we thought it would be best (and most rewarding) to focus on that. In addition, we wanted to create a concept that appealed to both casual and serious sports fans. The simplicity and nostalgic value that the game presents seems to be something everyone can relate to because the game of Bingo is as American as apple pie.

A: Honestly, we feel that one of the biggest assets of this game is that appeals to a wide ranging audience. People of all ages know the game of Bingo. Not only is Bingo simple to play but whether or not we want to admit it, it is also entertaining. This game essentially levels the playing field by allowing users to create their own board and rewarding “bonus points” for Bingos. While making the correct picks is important, the randomness of scoring a Bingo also plays a big part in achieving a high score.

Q: Do you remember the first time you fell in love with college basketball?

A: The game of college basketball started to be of more interest in the late 80’s and early 90’s. Some specific moments/players/teams that first drew adoration would include:

A: The one aspect about March Madness and the NCAA Tournament that always gets a lot of attention are the upsets or “Cinderella stories”. The #12 seed over #5 seed is one of the most popular picks each year, and for good reason. Since the NCAA tournament field expanded in 1985, the #12 seeds hold a 50-90 record against #5s, which means they win nearly 36% of the time. However, the ultimate upset or “Bracket Buster” would be the #16 seed over #1 seed, something that never happened in the history of the tournament…except once. On March 16th, 2018, the University of Maryland, Baltimore County (UMBC) defeated Virginia 74-54, becoming the first #16 seed to defeat a #1 seed. However, the defeated and deflated Cavaliers bounced back the following season by attaining another #1 seed and eventually going on to win the 2019 NCAA Tournament in dramatic fashion.

Q: Do you have any strategies for first time players?

A: Unlike traditional Bingo where the board is completely random, Bracket Bingo allows the player to create his/her own board. Many players feel that picking the National Champion correctly is a necessity for getting the highest score since it is worth the most points. However, that is not always the case. The 2019 winning card scored an all-time high of 65 points and did so without correctly picking the National Champion (Virginia). The one commonality among all winning cards thus far has been that each has scored a Bingo. So it seems that the key to success is arranging your picks/board in hopes of scoring the ever elusive Bingo*.

*On a side note, no single card has yet to score more than one Bingo.

A: Since starting Bracket Bingo we have tried to keep players updated and entertained throughout the season with an occasional Blog post/email. We’ve created the Bracket Bingo Busters which remembers the biggest upsets, buzzer beaters and Cinderella stories from past tournaments. In addition, we held a Fundraiser to raise money for the Coach V Foundation. The Baseline Challenge is a simple, fun and healthy way to bring awareness to an amazing cause. Finally, we make our presence known by attending college basketball games to spread the word about “the bracket game…you never heard of.” 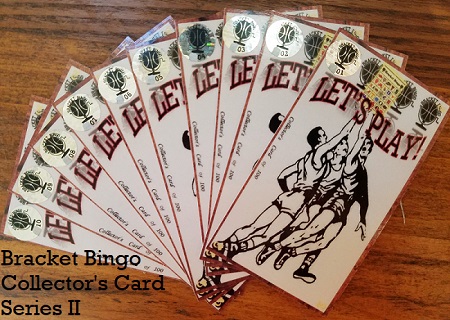